Property prices in Croatian holiday regions have made a two-part development over the last 15 years. After ascending steeply until 2009, prices fell due to the economic crisis, sometimes by up to 30% of the level before the global financial crisis. Panorama Scouting has published an extensive study, taking into account approximately 4,900 properties..
Article published on: 02/20/2016, 20:33
Property Price Study Croatia 2016 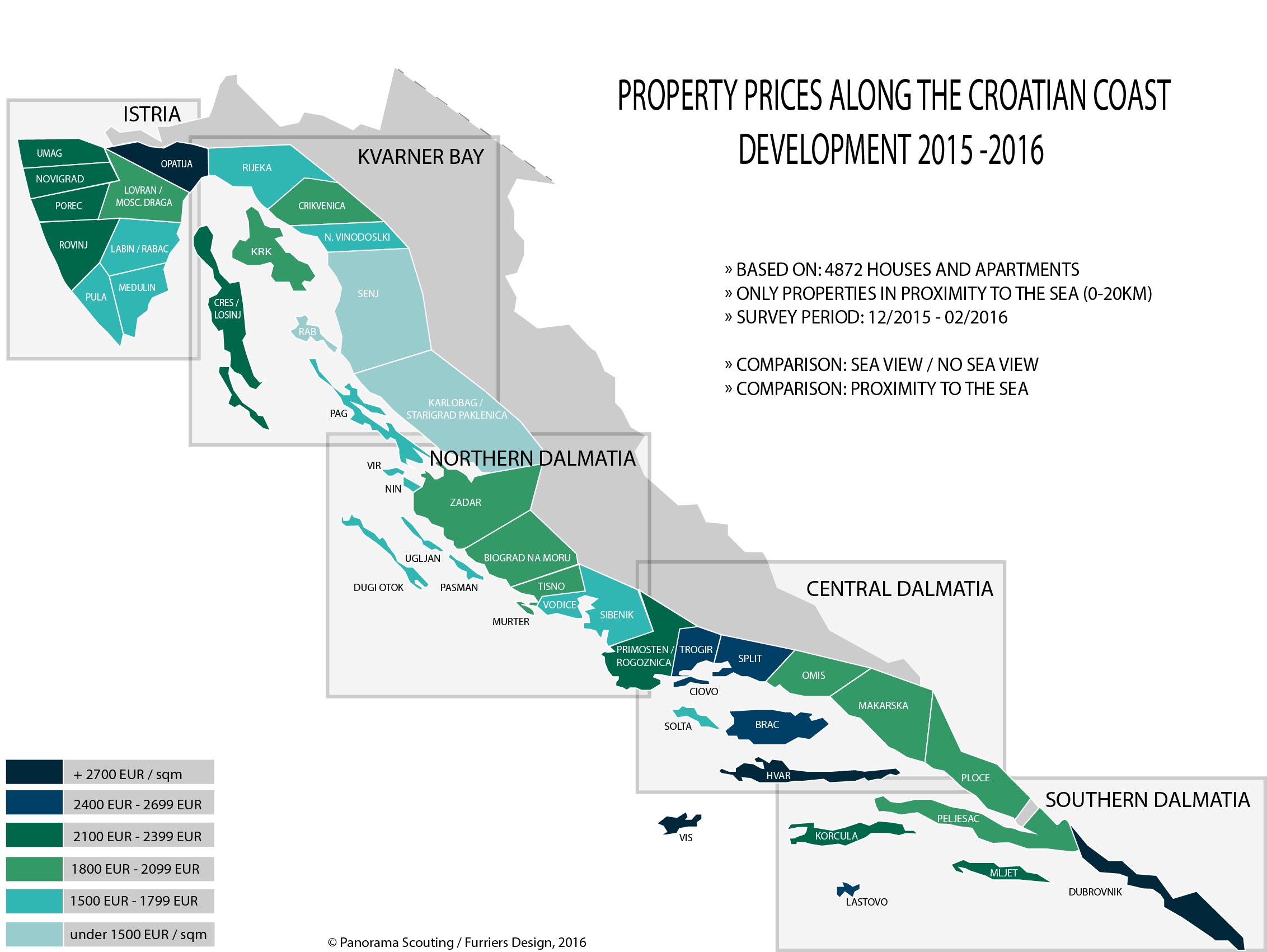 
To start with -- the big picture: the real estate prices of early 2016 in the coastal regions of Croatia are extremely attractive to potential buyers, compared with other EU regions around the Mediterranean. The prices per square meter -- about € 2,050 for living or usable space are at an almost unrivaled low level for a country on the EU Mediterranean which is still quite stable in spite of economic problems. Croatia shows little burglary crime and is traditionally open to visitors / buyers from foreign territory. 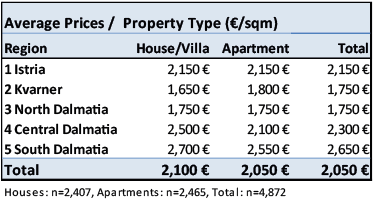 As the table shows, the average price of houses / villas in early 2016 are about € 2,100 per square meter for living / usable space and the price of flats / apartments are slightly lower, at about € 2,050.

As shown in the table and the graph above, there are quite remarkable regional differences in the average price / square meter per region: The cheapest region remains the Kvarner - easily accessible by car from central Europe or by plane.

Moreover, there are quite inexpensive regions for potential buyers in: the southeastern region of Istria, some areas of Northern Dalmatia such as Starigrad, the islands of Pag, Vir, Ugljan and Pasman on the doorstep of Zadar, and the southern areas of Vodice and Sibenik, plus Solta Island in Central Dalmatia. The remaining Croatian sub-regions are either in the middle price range or in the upper segments.


In our last year's study on real estate prices on the Croatian Adriatic coast we forecasted stable prices overall and a turnaround in the property with sea views and close to the sea. Where were we right and where wrong? 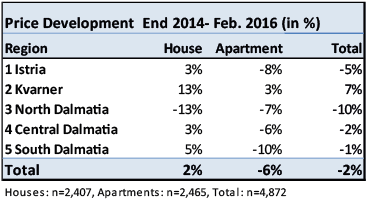 We were wrong concerning the development of the overall average home prices - they decreased in our panel (N = 4,872 properties) by 2%. However, this was due mainly to the property type; apartments lost 6%, whereas houses and villas increased overall by 2%.

The graph below ( "price development / sea view") shows where our assessment was correct: while homes "no sea view" again lost ground at -11%, properties with "sea view" increased by 5% - mainly due to houses / villas, at about 11% (!) compared to the previous year. Apartments with sea views remained relatively stable (-1%). Basically, it was foreign buyers who secured their deals on the Adriatic in an environment of strong price differentials from Central/North to Southern Europe. The good tourist season 2015 contributed to that.

In regional terms, the central and southern Kvarner 'won':the extremely low price level of the previous year attracted a disproportionate number of buyers. Northern Dalmatia, on the other hand, recorded losses in the price level, certainly due to the strong increase in supply of new buildings. For 2016, we see a continuation and reinforcement of the trend since spring 2015 looming: continued growth for real estate with sea view or at locations close to the sea. A stabilization in the remaining properties will probably depend mainly on the domestic demand for flats and homes.


What about the prices for properties with sea view?

According to our experience, buyers of this type of real estate came mainly from abroad - especially from countries such as Germany, Austria and Switzerland; they were to a lesser extent families with young children, but rather older buyers who were looking for an affordable retirement home.

The table shows the price differences in February 2016, divided by property types and coastal regions.

Central and southern Kvarner are by far the least expensive areas, together with some places in Northern Dalmatia. In particular, it is in these regions where we see the best potential for home value increase in the medium term.

How decisive is the proximity to the sea?

The adjacent graph distinguishes between 3 distance categories: “seafront“ (0-30m), “close by the sea“ (31-150m) and “other“, which are just over 150 meters from the water. This latter category serves as a basis for the higher prices in the categories of "seafront" and "close-by".

The table shows that prices are significantly affected by the distance to the sea - on Croatian average, a property is about 15-20% more expensive, if it is situated in the “close-by” zone (31-150m ), while there is an additional cost of even 60-70% for the “seafront“ (0-30m) properties. Particularly noteworthy are the strong surcharges for seafront properties in Istria and Central Dalmatia, which double more or less the price of more sea-distant locations (+ 150m). Seafront has its price! We consider it quite likely that this trend of increasing demand for seafront properties will continue throughout 2016. 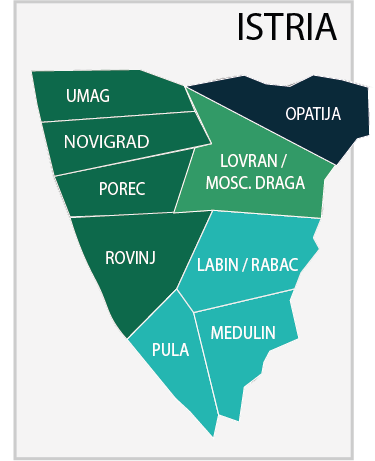 Property prices and development in Istria


Istria, the geographically closest region to Central Europe, is divided here in 9 sub-regions for better analysis (n = 1,554 properties), although said sub-regions Opatija and Lovran / Moscenicka Draga culturally and administratively already belong to the Kvarner region. The development of prices in the last year aligns to the Croatian trend, with a significant increase of houses and sea view objects, whereas in particular, apartments without sea view suffered significant losses.

In western Istria, where the coastal areas are quite shallow and long since touristic, sea view and proximity classification sometimes have a different meaning than in eastern Istria or in other areas where the coastal areas are steeper, and sea views thus have often more panoramic character. The prices on the West Coast - from north to south - at a level of € 2,100 - € 2,200 / sqm, are slightly above the Croatian average.

Further to the south and to the east it gets initially cheaper, before prices rise again, the closer one moves towards Opatija. Opatija itself takes one of the top places in the price ranking of Croatia. 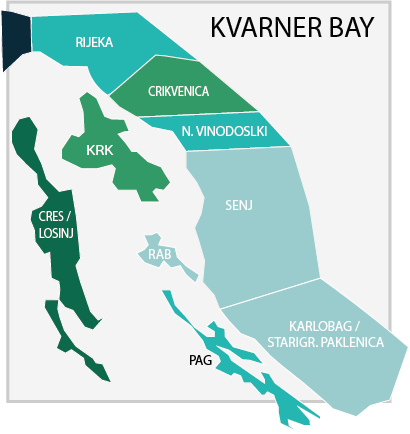 
Easily reachable by car from Central Europe, the Kvarner region, with its moderate to low price levels (except the Opatija area), was clearly among the winners last year: about 7% price increase, particularly strong in the area of houses / villas, but also felt at the apartments. The number of properties in this study was here n = 1,215.

On the mainland coast the most inexpensive areas begin from approx. Crikvenica in the North and extend down via Senj and Karlobag -- including the islands of Rab and Pag -- to Starigrad approximately, which administratively already belong to Northern Dalmatia. We see good development opportunities for those areas - not only due to the (still) very low price levels, but also because of the scenic landscape. 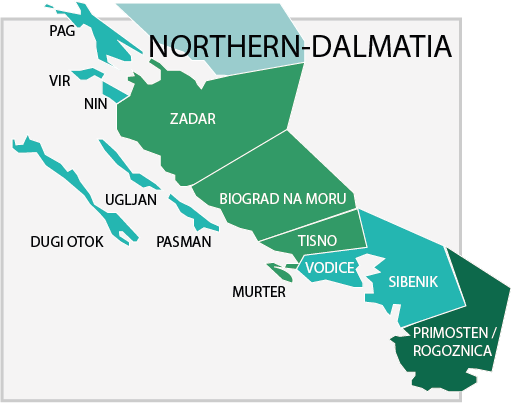 
The coastal areas of Northern Dalmatia, extending from about Starigrad up to Rogoznica and being more homogenous from a scenic angle than other regions, belonged (with and without sea view) to the losers in price level development in the domestic Croatian comparison. The number of properties included here in the study, is n = 833 homes.

We see the reasons for the price drop in this region due to the fact that here many new buildings came on stream, which then had momentary effects on prices.
We think a calming of this price level descent is likely when the new buildings, which have now come on the market, have found new owners. 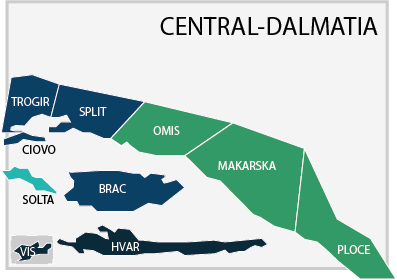 
The varied heartland of Dalmatia (taken from a scenic perspective) was represented in the study with n= 877 properties and showed in 2015 the typical price development trend: a total of -2%, due to properties (mainly apartments) without sea view, and a significant price increase of 9% for properties with sea view, especially houses and villas.

Overall, the Split areas and its "Home Islands" Ciovo / Trogir and Brac are on a slightly higher level than the average Croatian score, showing significant upcharges on “sea view features”. However, the sub-regions south of Split are not overpriced at all, being mostly below the Croatian average price level - showing good opportunities for increase in value. The islands of Hvar and Vis each have a special character - Hvar, e.g. is going to develop into a sort of Côte d'Azur (exclusive French Riviera) of Croatia.


We divided South Dalmatia into four sub-regions, taking into account the reduced size of the real estate market here, where meaningful statements can be made. The number of properties here amounted to n = 393 and were, in some places, quite close to a "complete survey". The real estate markets are -- except Dubrovnik and (partly) the island of Korcula -- quite manageable in size, and not too many properties are available.

The region of Ploce and the Peljesac peninsula are similar in price levels to their neighboring regions Makarska and Omis in the north. They are at or slightly below the Croatian average, which is due to the currently relatively expensive accessibility (located between the airports of Split and Dubrovnik). Dubrovnik itself - being a truly international destination as a port for big-sized cruise ships, and easily accessible by plane - is still the most expensive place in Croatia; here you pay an average of € 3,400 per square meter. Here once more the same situation: apparent demand and price growth for sea-view properties and strong discounts on properties without sea view / more distant to the sea.